What to Grow in Your State This January

Looking for a colourful addition to your garden to kick off 2018? Check out this list to find flowers suited to your area. Happy New Year from Hoselink! If one of your resolutions is to put more time into tending your garden, you’re not alone. There’s no time like the present to plant some stunning, colourful flowers and make 2018 the year of the green thumb!

Australia is a massive country, so here is a list of plants for each state and territory. As many states have similar climate conditions (and conditions can also vary dramatically across each state), be sure to check if this flower may suit your local area. 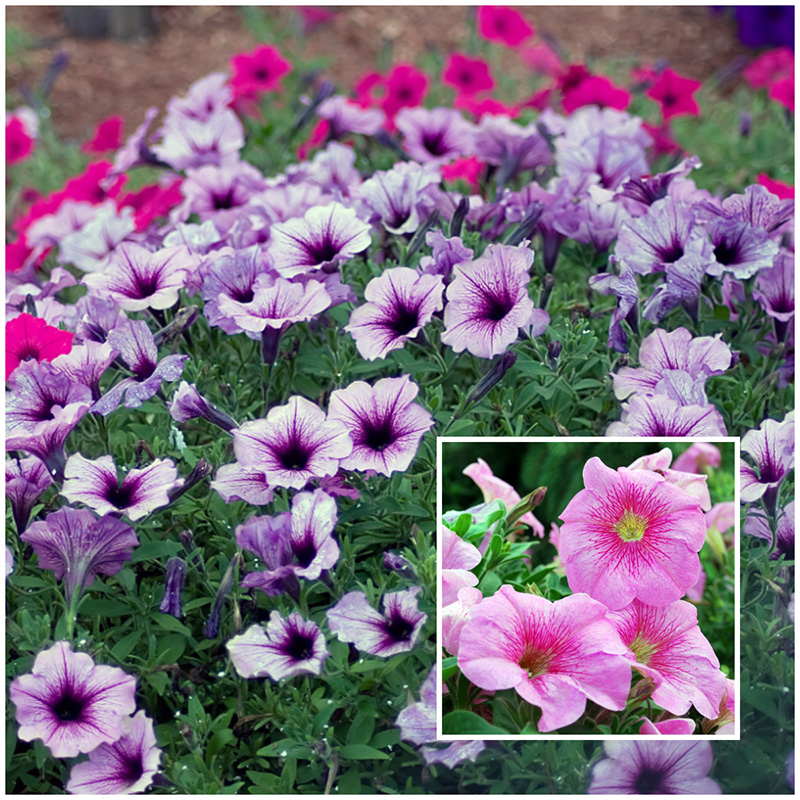 Native to South America, petunias are an incredibly popular garden bedding flower. They’re predominantly low-spreading with large, 5-petalled, trumpet-shaped flowers and hairy, sticky foliage. Plant them in a sunny area with moist, well-drained and nutrient-rich soil. Be careful when watering though, as the flowers of some varieties are easily damaged when watered too heavily! There is a trade off with the two oldest types of petunias, as the multiflora handles heavy rain far better, however, the grandiflora is larger and showier. Petunias will flower prolifically, though some varieties of petunias do require frequent deadheading to ensure a long bloom. In summer, petunias can be planted in cool areas like Tasmania, ACT, Victoria and the Southern Tablelands, as well as wet/dry tropical areas that span across the north of Western Australia, Northern Territory and Queensland. 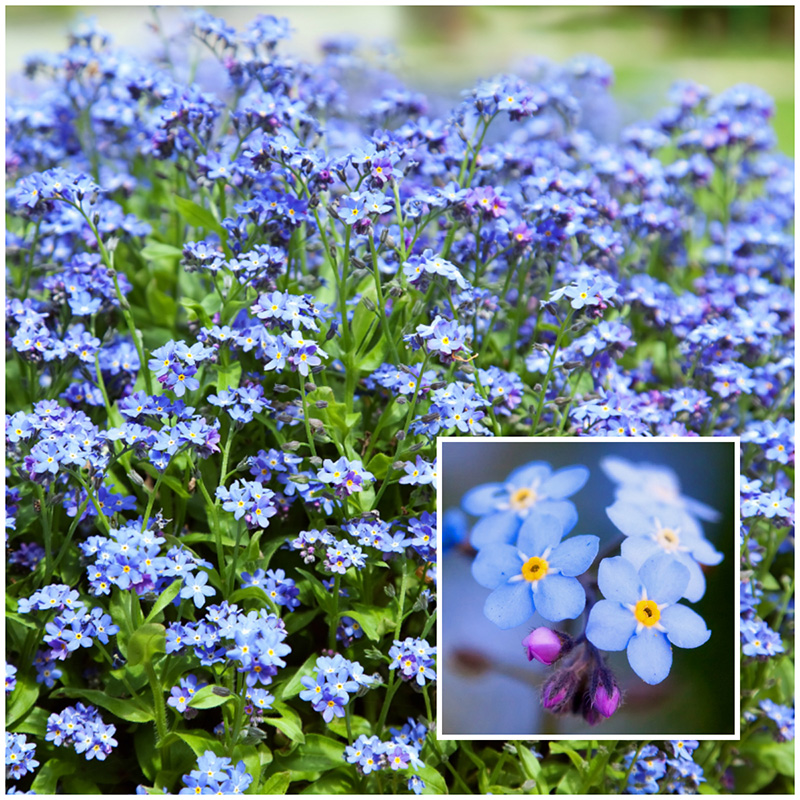 Myosotis goes by many names, the most common of which is ‘forget-me-not’, which dates back centuries ago to medieval Europe. Forget-me-not may seem like an ordinary, though pretty, blue flower. However, with a rich history of symbolism and mythology surrounding it, it makes a great addition to the garden. Because they like damp soil, try planting them next to a pond or stream if you have one in your garden. They need a fair amount of moisture in the soil, but apart from that, forget-me-nots are not fussy and will be happy in the sun or the shade. They also make great ground cover but be very careful, some species have the potential to become a problem in your garden due to prolific self-seeding. Forget-me-nots should really only be planted in summer in cool areas. This includes Tasmania, ACT and the Southern Tablelands. 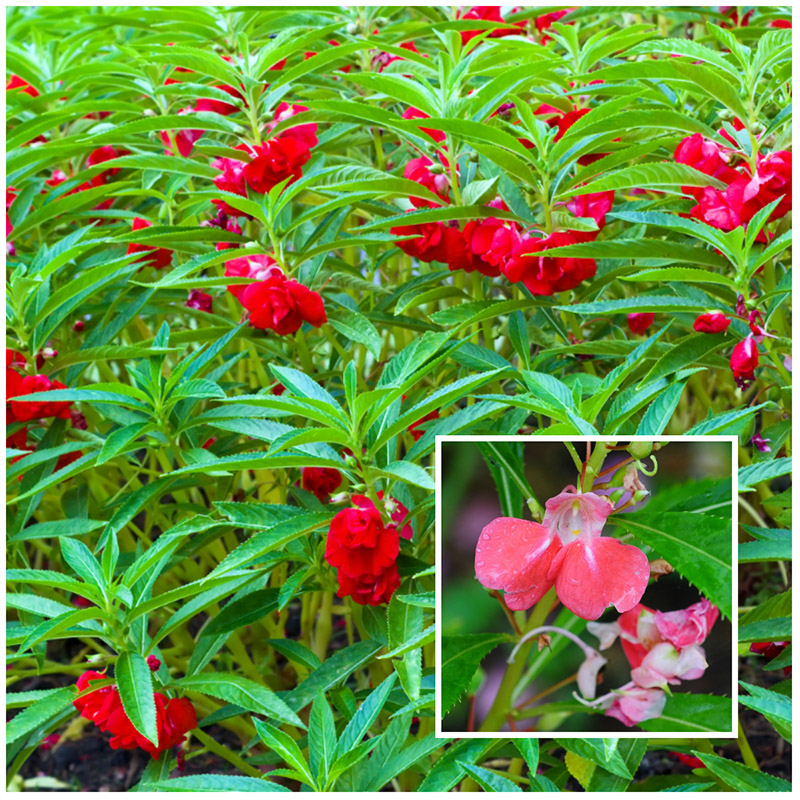 Also called touch-me-not, spotted snapweed and garden jewelweed (among other things), balsam was a favourite in Victorian-era gardens. It is native to southern Asia, and different parts of the plant were used as solutions for anything from snakebites and burns to gastritis and broken bones. A flowering annual, balsam is relatively easy to grow and blooms in blue, purple, pink, red and white. They can be grown in the garden or make great potted plants, and often self-seed. Plant in a shady spot with well-drained soil and plenty of rich compost. In summer, balsam can be planted in subtropical areas in south-east Queensland and northern New South Wales, as well as wet/dry tropical areas across the north of Western Australia, Northern Territory and Queensland. 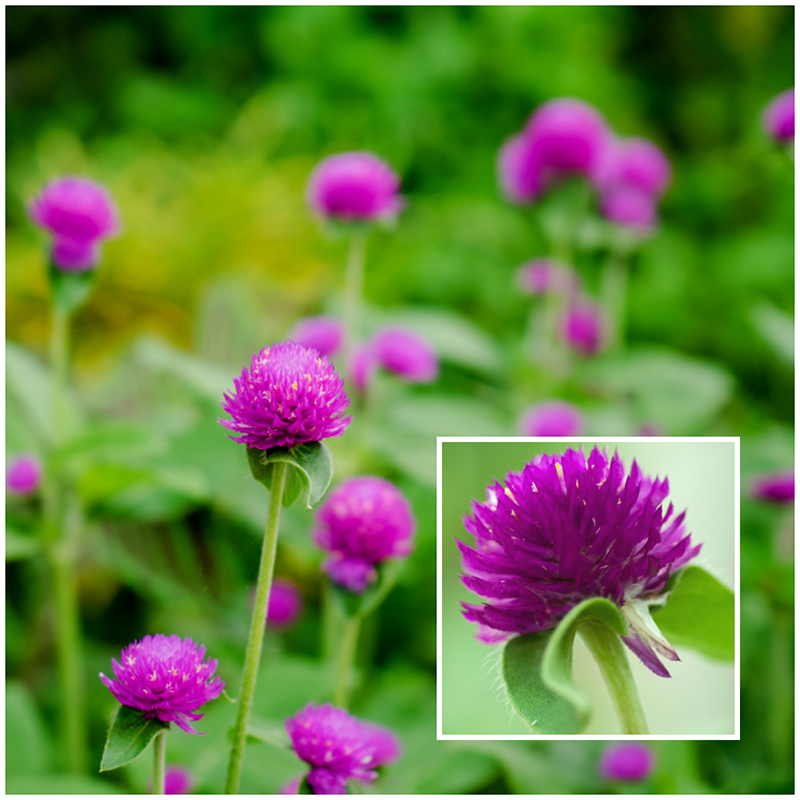 Incredibly distinctive in appearance, gomphrena flowers are globe-shaped and brightly coloured in purple orange and white. Due to its splendour, gomphrena is very popular for long-lasting dried and cut flower arrangements. It’s a good idea to stake the plant if you’re growing these taller varieties for display. Gomphrena looks stunning when paired with celosia in the garden. A summer flower, gomphrena is an annual that cannot withstand frost and cold weather. It needs full sun and well-drained soil, and will sometimes self-seed in warmer climates. Don’t be alarmed though, gomphrena does not become invasive.  In January, gomphrena can be planted in subtropical areas in south-east Queensland and northern New South Wales, as well as wet/dry tropical areas across the north of Western Australia, Northern Territory and Queensland. 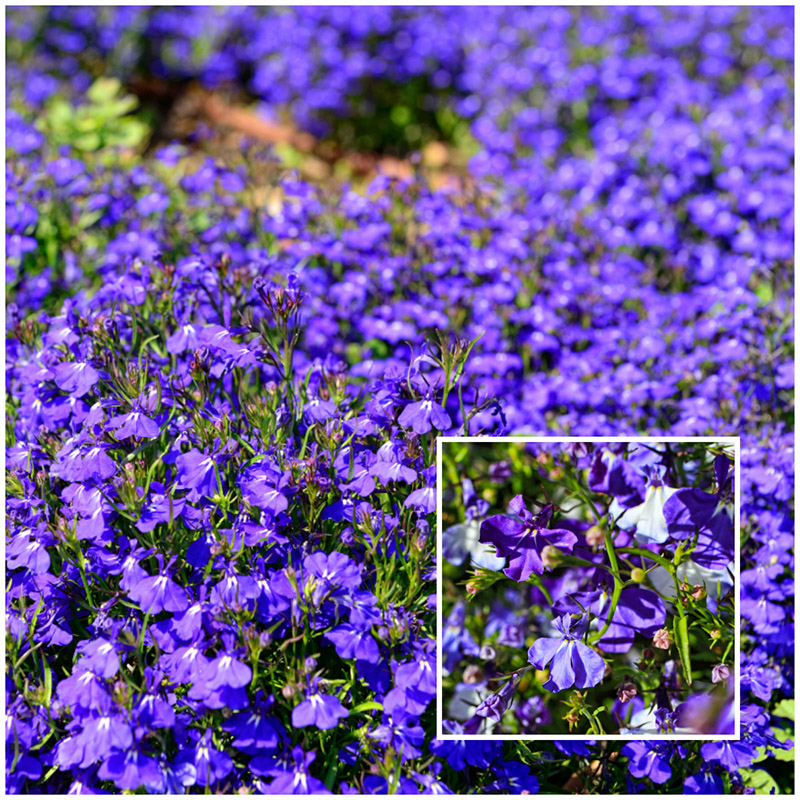 Beautiful as a border plant, in a window box or pot, there are so many species of lovely lobelia from which to choose. Red, pink, white and blue species are all available, however the most popular and common variety is violet-blue. Lobelias are resilient annual plants that usually require little maintenance, although during particularly dry and hot periods you should water them frequently. Plant them in moist, rich soil in full sun – however, they can withstand partial shade too. You can also deadhead them to keep the plant looking neat, though this isn’t necessary. In January, only plant lobelia in cool areas including Tasmania, Victoria and the Southern Tablelands, as it won’t flower in especially hot climates. 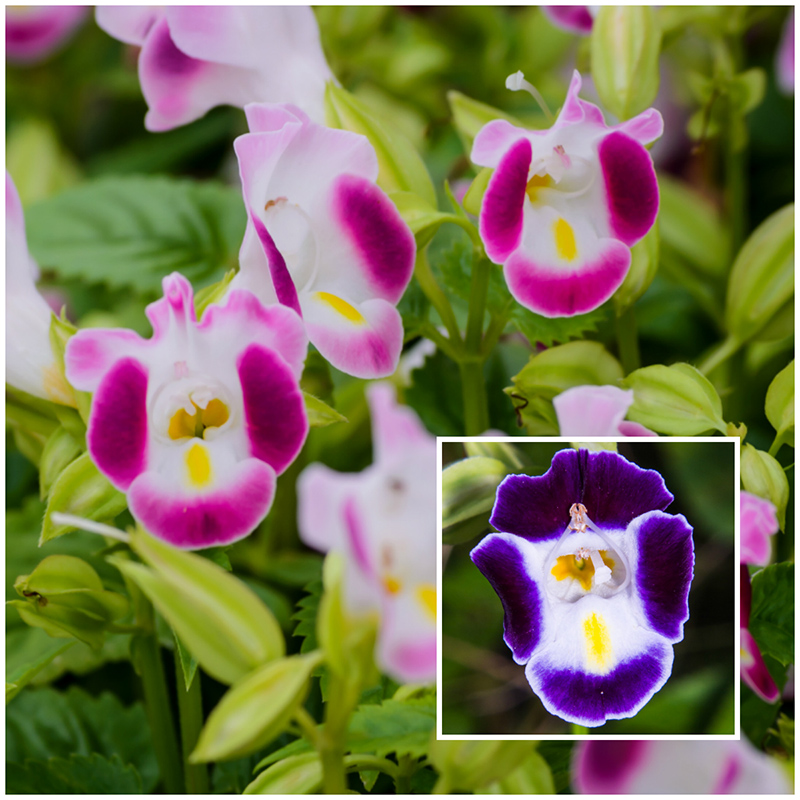 Torenia fournieri, known commonly as bluewings or the wishbone flower is a gorgeous flowering annual that comes in white, pink, purple and blue with yellow markings. Native to Africa and Asia, torenia are resilient and hardy plants with plentiful summer blooms. It was given the name ‘wishbone flower’ due to the shape of its stamens, which can be seen by squeezing open the flower petals. Be sure to choose an area that is well draining and water often to ensure the soil is kept moist. Try to find the sweet spot between dry and soggy soil – this is far easier if you use a thin layer of mulch. In summer, torenia can be planted in subtropical areas in south-east Queensland and northern New South Wales, as well as wet/dry tropical areas across the north of Western Australia, Northern Territory and Queensland. 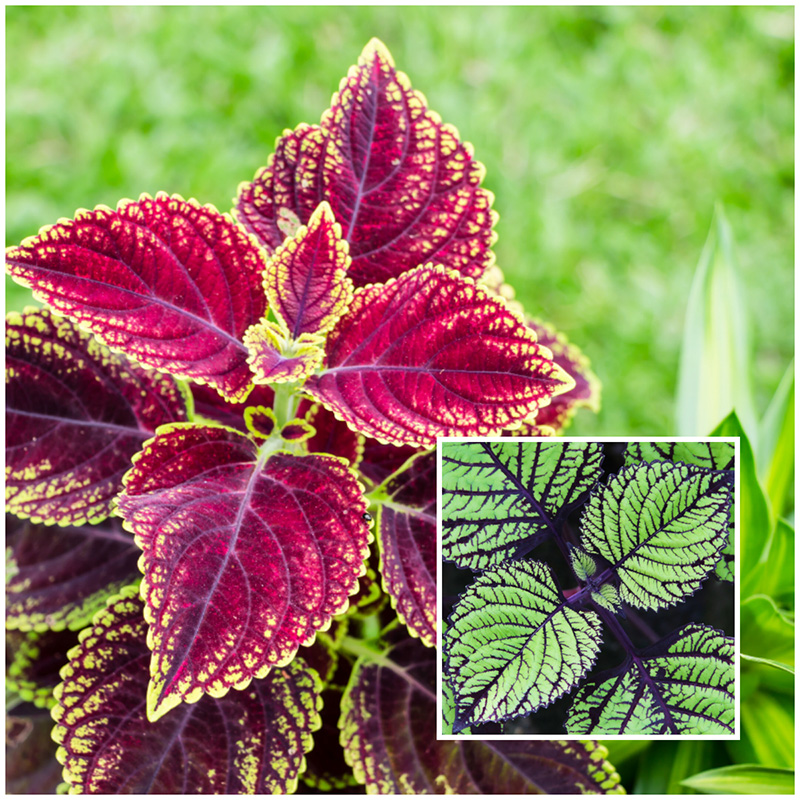 Unlike the other plants on this list, coleus plants are grown exclusively for their beautiful foliage rather than their flowers. Members of the large mint family, coleus is a hardy and comes in a variety of colours including purple, red, orange, yellow and green varieties. They are highly susceptible to cold temperatures and sensitive to the sun, so try to plant in summer with a fair amount of shade. They also make great indoor plants, though it is important to select the right variety and the right size pot to avoid them growing over! In summer, coleus can be planted in subtropical areas in south-east Queensland and northern New South Wales, as well as wet/dry tropical areas across the north of Western Australia, Northern Territory and Queensland. 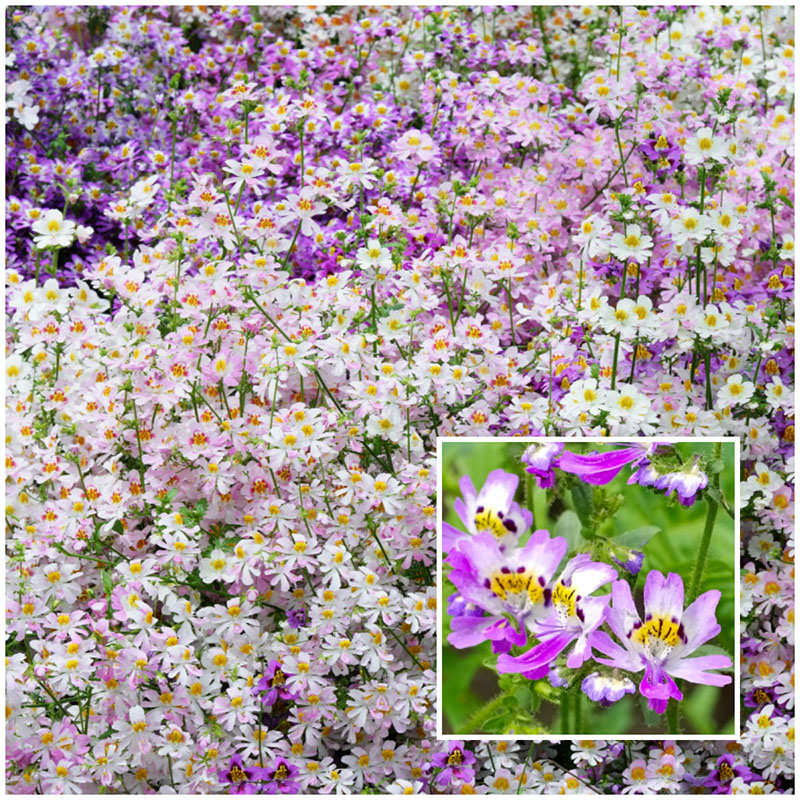 Schizanthus closely resemble orchids, hence their nickname ‘poor-man's-orchid’. They are also known as the butterfly flower and fringeflower, and are a member of the Solanaceae (nightshade) family. Orchids have a reputation for being difficult to grow, so Schizanthus is a great alternative for those who don’t want to invest all that time in fussy flowers. It needs well-drained, nutrient-rich soil and a spot in the garden that get sun in the morning and shade in the afternoon. The bush grows rapidly, and can reach around 50cm in height. In summer, Schizanthus should only be planted in cool areas including Tasmania, Victoria and the Southern Tablelands. If it’s too hot, the plant will stop growing before it reaches a suitable size and won’t bloom in the same stunning way.