Recognisable by their thick grey fur, white-coloured chest and large fluffy ears, the koala is a quintessential Aussie icon. Most likely to be spotted chilling high up in a tree, using its strong, sharp claws to manoeuvre between branches, koalas are a largely nocturnal mammal, spending much of the day – and night – snoozing.

First established in 1987 as Hunter Koala Preservation Society, later becoming Port Stephens Koalas in 2016, the charitable organisation is dedicated to the wellbeing and safety of Australia’s beautiful koala population. Caring for sick, injured and orphaned koalas, the dedicated team provide essential care and rehabilitation at their purpose-built sanctuary in Port Stephens to give these tree-dwelling marsupials the very best chance of returning to the wild. In addition, the charity's work is helping to preserve koalas' natural habitat so future generations can flourish – don't miss the koala release video at the end of the article! 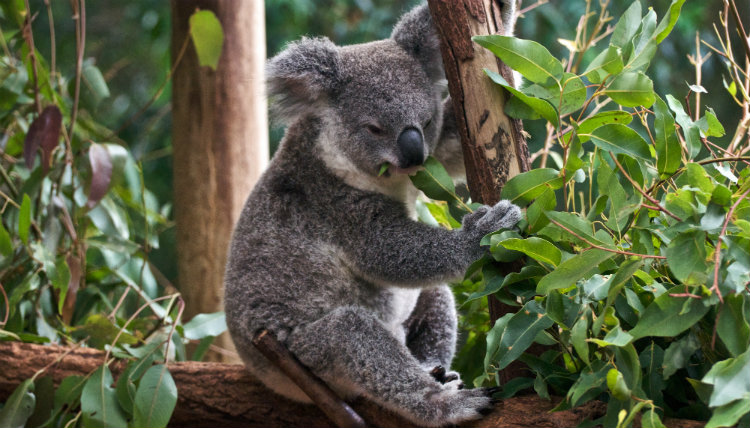 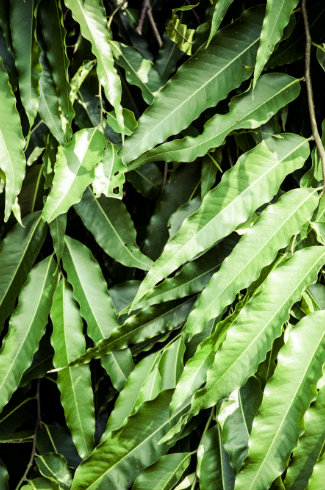 Not just a cute face, koalas are a fascinating mammal believed to get their name from an Aboriginal term translating to ‘no water’, likely because they get almost all of their moisture from gum leaves, which contain around 55% water content (along with around 4% protein, 15% fibre, 7% carbohydrates, 6% oil and 13% tannins).

Found in the dwindling eucalyptus forests of Eastern Australia, you may be surprised to learn that these cuddly creatures can consume up to 1kg of gum leaves per day, which would explain their need for 18-20 hours of sleep – the amount of time required for digesting this low-energy food. Interestingly, these leaves are actually toxic to most animals, however, koalas have a long digestive organ called a caecum that contains a special bacteria used to break down fibre, allowing the koala to consume the leaves safely.

Though many people refer to koalas as 'bears' due to their teddy-like appearance, they are in fact marsupials related to the kangaroo, wallaby and wombat families, with a pouch in which they carry young. Females give birth to a single joey after a brief gestation period, when the tiny infant will find its way from the birth canal to its mother’s pouch, spending six months solely in the confines of the pouch and a further two months feeding and sleeping in it as the joey develops. The rest of the time joeys can be found clinging to mum's back as they become more independent, leaving their mother entirely at around one year old. 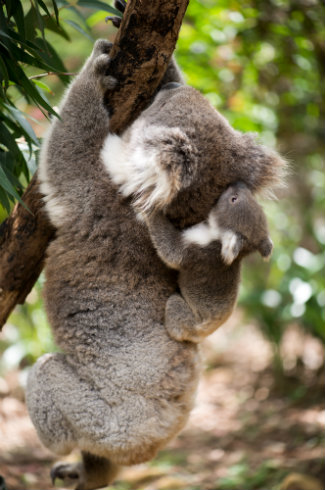 Koalas are classified as threatened due to the loss of habitat through land clearing, drought, bush fires and lack of habitat protection. Events such as these cause koalas undue stress, which weakens the immune system and allows dormant diseases to activate. Loss of habitat also makes koalas more vulnerable to dog attacks and road accidents as they go in search of new homes. At the newly opened Port Stephens Koalas Hospital, rescued koalas spend their days recovering in specially created rehabilitation yards where they are nursed back to health in the hope they will one day be re-released into the wild. Joeys and critical care adults are looked after by Home Carers that provide one-on-one care in conjunction with a vet to get them through the first few critical stages of growth. Once they're through this care and the joeys have been fully weaned, they come to the rehabilitation centre for dehumanising and pre-release preparation. Each day CEO Ron Land and his team of rehab workers and volunteers check the koalas, observe their behaviour, review overnight footage taken from a clever security system and provide fresh food and drinking water. Leaves are put out twice per day, but not before being misted with Hoselink’s Premium 7-Function Spray Gun to wet them for added moisture. As with many animals, the koala’s scats (faeces) are assessed each day to give a more detailed picture of the koala’s health. Notes are also taken on the number and position of scats to help staff know if the koalas are moving around at night. The team are also responsible for providing any supplementary feeds, treatments or medications, as well as cleaning yards and branches and completing daily records for each koala to monitor its leaf consumption, type and number of leaf species provided, scat details, movements, behaviour and general health information.

We were thrilled to discover the sanctuary has Hoselink Retractable Hose Reels installed in every yard, which are used for general hosing and cleaning, watering plants, cleaning shoes before entering the Rehabilitation Yards, filling up leaf holding pots, removing urine and scats from branches and misting koala food leaves. The team explained the ‘shower’ and ‘mist’ spray options on the Premium 7-Function Spray Gun helps them to keep noise at a minimum to avoid scaring the koalas as they fill up the leaf pots, while the retractable feature on the hose reel reduces the risk of tripping, or a koala getting tangled up.

Since 2016 there have been hundreds of koalas released into the wild and many more cared for. If you come across a potentially sick or orphaned koala, you can call Port Stephens Koalas rescue number 24/7 on 1800 775 625. Most sick koalas will come to the ground or stay low in the trees, or you may notice something unusual about their appearance, such as weeping eyes or brown fur – if in doubt give the team at Port Stephens Koalas a call or visit www.portstephenskoalas.com.au to find out more about the organisation, make a donation or to enquire about rescues, adoption and volunteering. 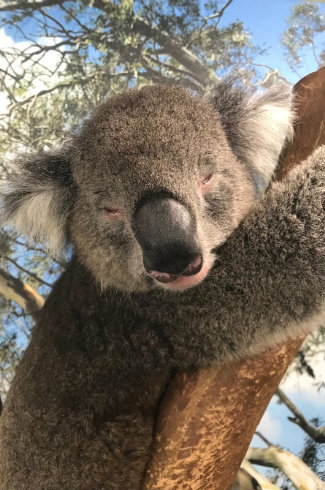 • Both male and female koalas sometimes store extra food in their cheek pouches, kind of like a mini lunch box used to snack on when they wake from sleep!

• Once conceived, a baby joey takes just 35 days to form before birth

• A joey is only around 2cm long at birth and is totally hairless, blind and born without ears

• The koala has one of the smallest brains, in proportion to body size, of all mammals

• On average, koalas live between 10 and 15 years in the wild

• Koalas differ in size, fur type and colour between the north and south of Australia

• The leaves koalas consume are very fibrous and low in nutrition