Discover what’s flying through the trees, scurrying round the yard, flapping amongst the flowers and going bump in the night in your backyard this month 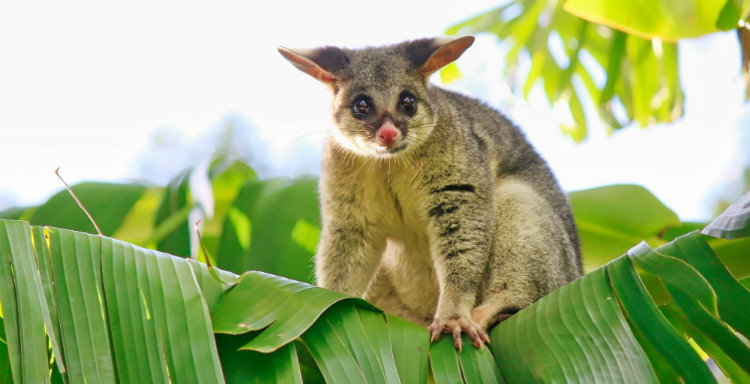 At this time of year our wild garden visitors will be seeking extra food, shelter and places to hunker down in during cold snaps. You may not think of the cooler months as a good time to see wildlife, but there is plenty of opportunity to spot anything from birds and butterflies to possums and bats as the seasons change.

Australia’s varying climates can mean hugely varying wildlife, where anything as exotic as an echidna to as humble as a bee can be seen. Whether you have a balcony or a backyard, pot plants or bush land, each individual outside space works to attract a range of native wildlife.

Whilst there’s a good chance of spotting at least one of the species featured below, there are multiple factors that can affect what you see and when, including if you have any pets likely to chase visitors away, if a source of water is provided, quality of shelter and availability of food supplies in your garden. These are all things you can take control of by making a few subtle changes to your yard. Planting native species and planning garden beds with local wildlife, particularly pollinators, in mind, providing a bird bath or small pond and putting up a nest box are a few simple things that can make a big difference. 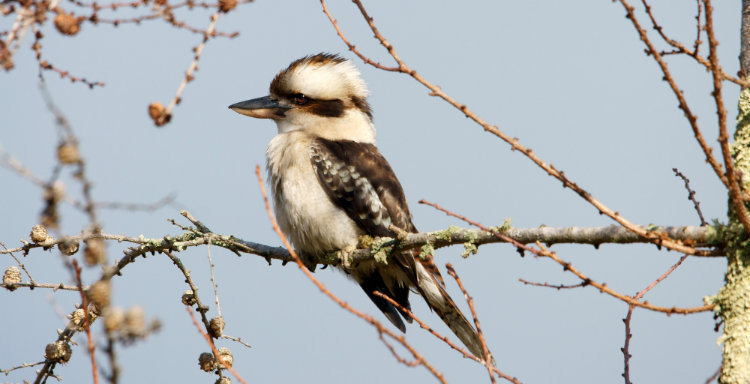 There are hundreds of bird species to be found in Australia and, depending on where you live, there’s a chance to see anything from the much-loved laughing kookaburra (pictured above) or bold rainbow lorikeet to the brash sulphur-crested cockatoo or the charming scarlet robin perched in your yard.

Love them or hate them, the Australian magpie is one of the most common and widespread species in the country. A fixture of the landscape, the magpie is an easily recognisable black and white 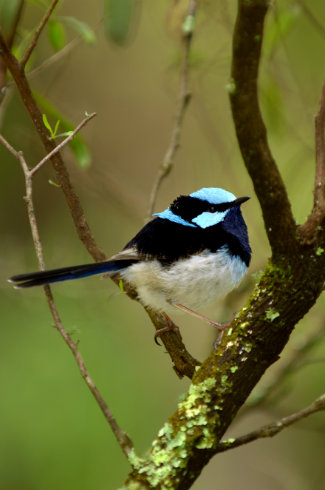 bird. Incessantly territorial – and noisy with it – the magpie is perhaps best known for its powerful song and scary swooping behaviour – actually a defence mechanism to protect their nesting site. These intriguing birds occupy the same territory for their entire life and research has shown they can actually recognise other magpies and even people!

A common sight in the east and south of Australia is the superb fairy-wren (pictured right), a bird most will only recognise by the male’s striking blue and black plumage. A distinct black band across the eyes and pale blue markings that turn iridescent when the male is seeking a mate makes this tiny bird stand out, while the jenny wren wears a more inconspicuous brown coat. Superb fairy-wrens can be spotted in small social groups amongst areas of dense cover and low-growing shrubs.

Ranging over most of the continent, the zebra finch is another garden favourite, identifiable by their black ‘tear drop’ eye strip and stripy black and white tail feathers. The birds feed in large flocks mainly on grass seeds and insects in the drier areas of Australia, forming lifelong monogamous bonds between pairs. 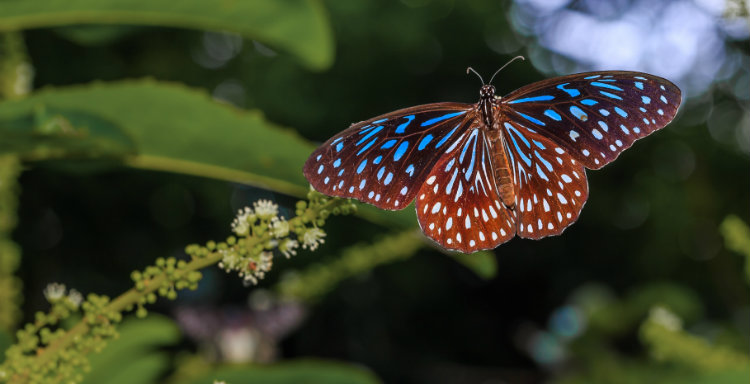 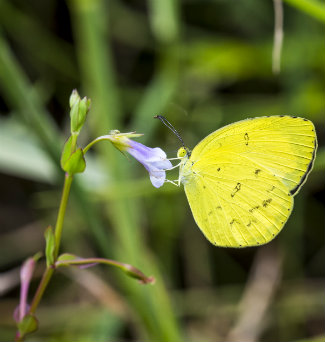 Offering a beautiful blaze of colour and movement, butterflies make a striking addition to any outside space. The majority of butterfly species feed on nectar from the base of flowers and are attracted to blooms such as daisies, purple-top verbena, kangaroo paws, buddleias, flax lilies and pimeleas.

Look out for the orchard swallowtail, a large black, white and red butterfly usually seen swooping and flying in wide arcs around citrus trees, its food plant of choice. Meanwhile the common grass-yellow (pictured left), a dainty lemon-coloured butterfly, spends summer visiting gardens in the tropics before moving on to yards further south in autumn.

Another striking species to look out for is the blue tiger (pictured top), a pale blue and black patterned butterfly frequently spotted in Queensland. This long-lived species spends its days feeding off its favourite host plant, the corky milk vine, and can usually be seen resting in sheltered spots in the garden as winter approaches. 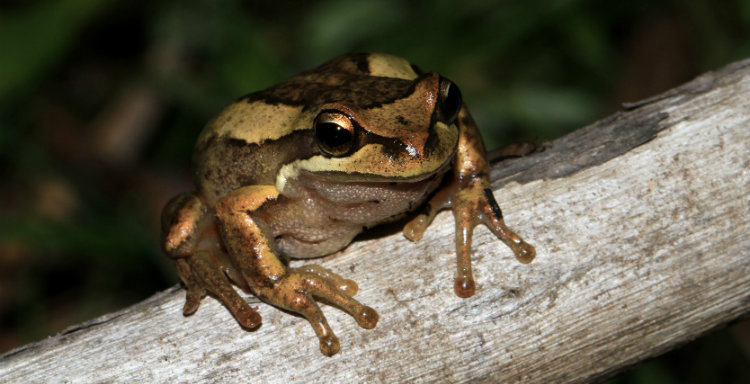 If you have a pond in your backyard then you’ve got a very good chance of seeing frogs, who lay their eggs in the water. The bumpy rocket frog can be seen in the north of Australia and can easily be mistaken for a toad due to its brown warty skin, however its slender body and moist skin makes it an unmistakable frog. The bumpy rocket frog has a loud, high-pitched ‘beep beep’ call and autumn is perhaps the easiest time of year to see them in the pond as the young start to grow legs.

In Perth and around the South West, you’re more likely to hear the distinct growl of a motorbike frog; a large frog that can vary in colour from shades of green and gold to brown. It can be seen loitering around ponds with heavy vegetation, as well as in swamps and around streams, and you’re most likely to hear it before you see it!

If you’re based in the South, then the southern brown tree frog (pictured above) is one of your local neighbours and likely a common guest in your garden, where they like to squeeze under logs and leaf litter near water. Feeding on flies and mosquitos, southern brown tree frogs are a gardener’s friend and can be recognised by the wide brown band that runs from its head down its back. 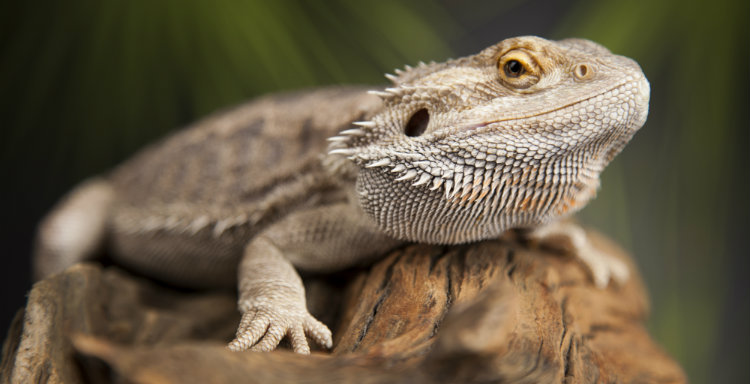 A few well-placed rocks and a source of water, such as a pond, will have lizards fighting it out for a spot in your sunny backyard. Around the east and south east of Australia, eastern water skinks will be 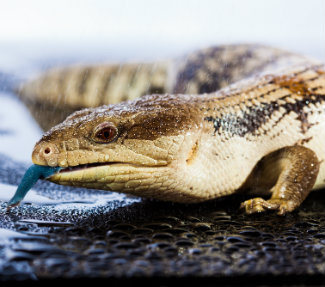 busily preparing for the onset of winter; soaking up the last rays of warm sunshine and seeking out as much food as possible. Its brown coloured body flecked with black helps it to camouflage, so you’ll need to look closely to see one in your garden.

Common in the wild across Australia is the bearded dragon (pictured above), named so for the spines that decorate its chin and around its throat. These lizards can usually be seen sunbathing on rocks, pavements, driveways and even on fence posts thanks to their nimble climbing skills, and they’re not as skittish as most smaller species, so there’s a good chance you’ll get a closer look.

There are also six species of blue-tongued lizards (pictured right) found in Australia, and between them they can be spotted in almost every region of the country. Each species varies in shape, colouring and pattern, but all have the same distinct blue tongue and snake-like head. Tall grasses, leaf litter, rocks and shrubs to shelter under makes an ideal habitat for attracting one of these striking lizards. 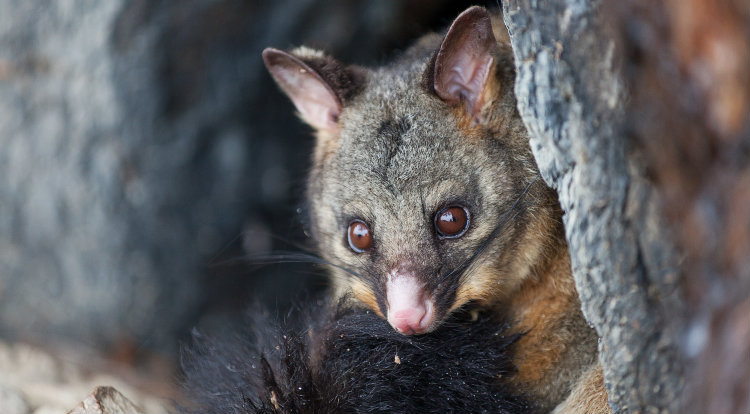 There are two species of possum you’re most likely to spot hanging around your garden: the common brushtail (pictured above) and the common ringtail. These cute nocturnal marsupials have adapted well to living in urban areas, though their presence is often unwelcome as they make nests in sheltered areas such as garages and are known to eat fruit, leaves, rose buds and shoots from the yard. About as big as a domestic cat with a pointed snout and large ears, possums find shelter in tree hollows during the day and emerge to find food after the sun sets. As much as they may cause annoyance they are protected under the Wildlife Conservation Act, so it’s worth finding a way to live in harmony. Providing suitable nesting boxes may deter them from making a home in your roof, while spraying areas you don’t want them to invade with a strongly scented tea, garlic water or bitter oil will help put them off eating your prized plants. 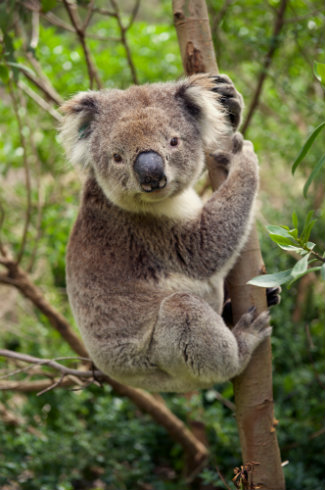 Alongside these common garden visitors you may just spot a wilder species from time to time. Bats, koalas, kangaroos, wallabies, bandicoots and snakes are all possibilities but often require more specialist conditions, whilst some, like the echidna, prefer to remain elusive and will go out of their way to avoid being seen.

It’s well worth keeping your eyes peeled this autumn to see what might turn up in your backyard!