One of the more visually stunning animals we get to share this planet with! Read on and learn about 8 of our favourites here in Australia!

There’s much more to butterflies than meets the eye. See below as we discuss some of our favourites and explore just how beneficial they can be to the environment as well as your veggie patch! There is nothing more tranquil than spotting one of these brilliantly coloured insects fluttering around your garden. Aesthetics aside, butterflies play a critical role in pollination, a process which plants rely on to grow and reproduce. Similar to bees, butterflies fly from plant to plant feeding on the nectar of vibrantly coloured flowers and transfer pollen to the plants' female reproductive organs. Understanding this makes you realise how much more butterflies are to us than just nature’s decorations.

Dubbed the “king” of the butterflies, the Monarch is magnificent with its distinctive black, white and orange markings. Seen all over the world, the monarch is mainly found in North America (between southern Canada, the Caribbean and northern South America). However, it is also found in South East Asia and Australia, and has even been spotted as far afield as northern Africa and the UK!

Their markings include bright orange wings covered with black veins and rimmed with a black border and white dots. Females have thicker veins in their wings. A monarch's colour combination lets predators know that they’re poisonous, a huge bonus! The butterflies get their toxins from a plant called milkweed, which is their only food source in the caterpillar stage. An animal that eats a monarch butterfly usually doesn't die, but will feel sick enough to avoid monarchs in the future. 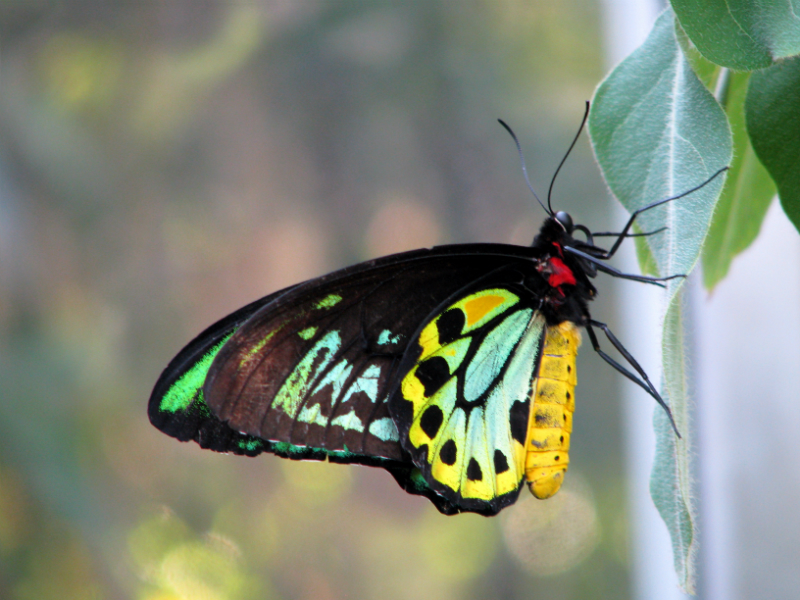 Known commonly as the Cairns, or Cooktown Birdwing, this bright butterfly is endemic to a small area of north-eastern Australia. Preferring the rainforests of Queensland’s wet tropics region, this Birdwing can also be found in suburban gardens in Cairns.

It’s also the largest species of butterfly found in Australia! The female has a huge wingspan of 15cm, and is a little duller (black and white with a touch of yellow), than the male who has a green, gold and black colour combination. Cairns Birdwing Butterfly can live for 4-5 weeks.

The males are quite predatory when it comes to mating and patrol their territory in the early morning, looking for new females. However, they must deal with a plethora of competition guaranteed to invade his territory. The Ulysses butterfly is a swallowtail butterfly, found in Australia, Papua New Guinea, Indonesia and the Solomon Islands and are commonly referred to as a symbol of Australia’s tropical coastal lifestyle.

With 16 known subspecies of the Ulysses butterfly, they’re most known for their famous dance done so in a morse code fashion and heavily dictated by their mood. It’s used as a tool by the butterfly to confuse their predators, and the more compelling the dance, the likelier is it for them to breed and live. They do this for up to one month before their wings tire out and their life cycle comes to its natural end. They are generally found in tropical rainforests as well as suburban areas. As their numbers are slowly diminishing, some conservation are needed to be undertaken to save the species. This butterfly is named for its vibrant turquoise, triangle-shaped wings. With a wingspan of between 6.5 and 7.5 centimetres, the Blue Triangle Butterfly is commonly seen around Sydney and Australia’s eastern coast, from Torres Strait to Kiama. It thrives in a range of habitats including forests, woodlands, rainforests and even urban areas.

The Green Blue Triangle Butterfly larvae rest on the upper side of the leaves and can be quite difficult to see. If the plant is disturbed, you are more likely to smell them before you see them.

With 15 classes of photoreceptor cells, this species is even able to distinguish colour, brightness, movement and shape. The highest know number of photoreceptors in another insect is 9, demonstrating the Blue Triangle’s sense and intelligence. The chain swordtail (Graphius Aristeus) is a butterfly in the family known as ‘papilionidae’. It is predominantly found in the Indomalayan and Australasian realms. The forewings are yellowish, while the outer part of its wings are dark brown with a thin yellow strip. Each hind wing has a very long tail and the butterflies have a wingspan of about 5 centimeters.  This species is said to be named after one of the Gods of Ancient Greece, Aristeus, who was a beekeeper and a son of the sun god ‘Apollo’. Tailed emperor butterflies were given their respective names because their hind wings have two tails on each side. They are native to mainland Australia and are mostly spotted in South Australia and Queensland, although they have been spotted in the northern and eastern parts of Australia.

Sexual dimorphism does not exist in this species. Their wings are colourful, from black to cream, brown, tan, and orange. Female tailed emperors are larger in size than their male counterparts, although the male emperors are very dominating in their territory. Generally, the males are spotted at a range of higher altitudes in trees and their beautiful presence can be enjoyed annually in late spring or early autumn. The Green-spotted Triangle is one of four native species of ‘triangle swallowtails found in Australia. This species is found along the northeast coast of Queensland and not very far inland, from Cape York to Rockhampton and occasionally as far south as Fraser Island.

It lives in tropical and monsoonal rainforest areas, and like other triangles can fly very fast, often keeping its wings moving rapidly while feeding from nectar-rich flowers in nearby gardens. It’s so hard-working that it only occasionally stops for a rest. Unlike the similar Green Triangle, the lower-wing of the Green-Spotted Triangle usually has a small tail which can vary in length from butterfly to butterfly. It also lays its eggs on a wide range of native and cultivated plants. The Common Eggfly Butterfly, also known as the Varied Eggfly Butterfly and the Great Eggfly is found in Madagascar, through Asia and, of course Australia. They get their name from the egg-shaped patches on the wings of the male butterfly.

The Common Eggfly Butterfly is a black-bodied butterfly species with a high degree of sexual dimorphism. One of Australia’s most distinctive butterflies, it is the female of the species that can showcase itself with multiple morphs, which describes the variation in the colours and patterns on show and makes the female butterfly of the species so variable.

The male of the species has a strong territory habit, often aggressively chasing away any butterfly that flies into its territory, then returning back to the same spot. They’ve even been known to stay in the same spots for days. The female of the species is known for its protective, maternal nature, with the females known to guard the leaves that surround where they have laid their eggs.