Everything you need to know about 13 Poisonous Plants in Australia.

Keep an Eye Out for These Toxic Beauties

If you or someone in your care might have been exposed to a poisonous plant, immediately call the Poisons Information Centre on 131 126 for advice (24 hours a day, 7 days a week, Australia wide). If you need to go to the hospital, try to take a piece of the plant with you for identification purposes.

Sometimes it can feel like that everything in Australia is deadly, from snakes, spiders, sharks and entire outback! Well you can also add plants to that list. Whilst they aren’t exactly out to get you, if you mistakenly eat one then it can be deadly. I like to think that the majority of the population wouldn’t go sticking plants in their mouth but children and pets often do! That’s why it’s important to know which plants are likely to have disastrous consequences if that happens. 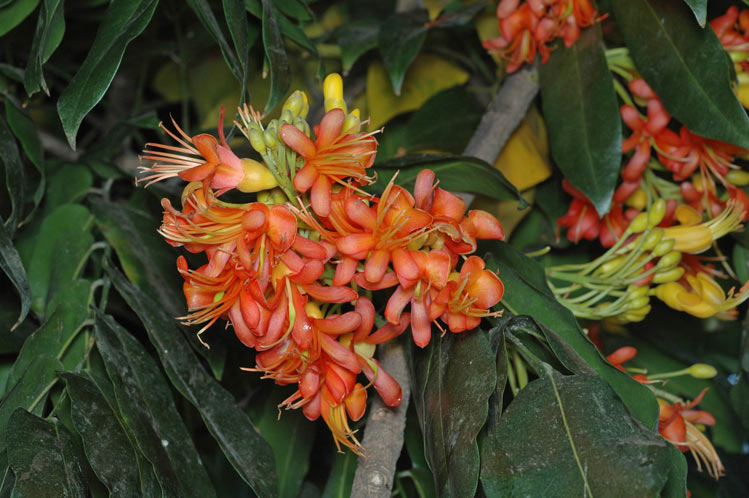 Native to Queensland and New South Wales thrives in moist soil along riverbanks and mountainsides in coastal rainforests. From March to May, it produces large pods filled with toxic seeds that weigh roughly 30g each. Ingesting the seeds can cause vomiting and diarrhoea and can be serious if medical attention is not sought. Its seeds have been utilized - following extensive preparation as a food by Aborigines and it contains alkaloids which have been shown to have anti-HIV and anti -cancer properties. 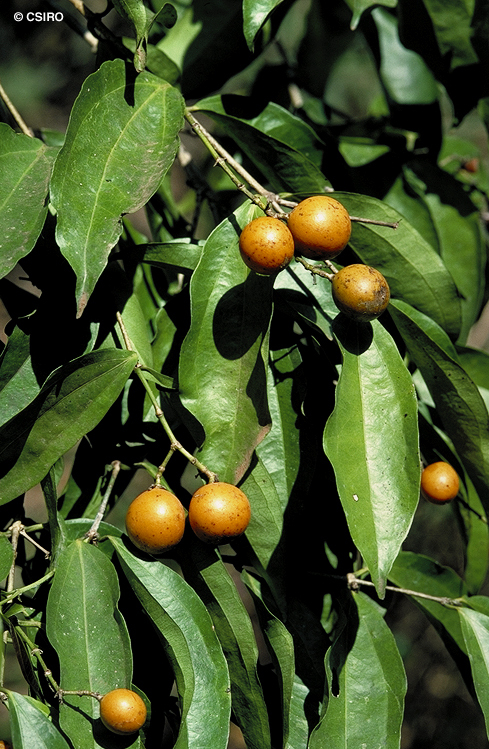 Native to South East Asia and Australia. This tree bears small, orange-coloured fruits with highly poisonous seeds that are neurotoxic - they harm the body's nervous system, causing convulsions, paralysis, and even death. Its principal action is to cause uncontrolled muscle contractions. In overdose, these lead to death from exhaustion or cardiac arrest. The muscle contractions can result in muscle tearing itself away from bone allowing the body to be twisted into normally impossible positions.

The tree's blossoms and bark can also be poisonous, containing the alkaloids strychnine and brucine. At low levels, however, it has been used to promote appetite and is said to aid digestion in humans. The strychnine tree is used in homeopathic and herbal medicines but has also been used as rat poison. Never consume this tree without seeking professional advice first.

Native to South America but naturalised in Australia. 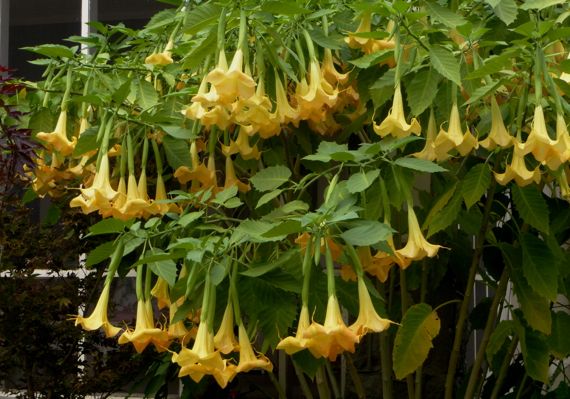 Named after their large, billowing flowers, Angel's trumpets are medium-sized trees or shrubs with strong, thin trunks and flowers of red, white, orange or pink. Despite their pleasant appearance and aroma, these common garden plants are highly toxic, particularly their leaves and seeds. Rich in alkaloids such as scopolamine and hyoscyamine, if ingested by humans, the trumpets can cause diarrhoea, confusion, migraines, paralysis and even death. 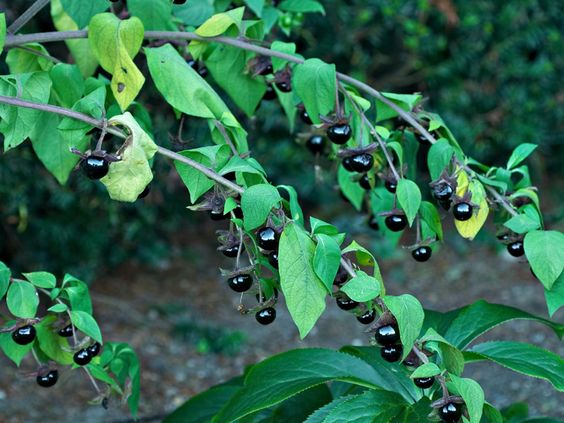 The deadly nightshade plant and its berries are very poisonous and contain tropane alkaloids that cause hysteria, hallucinations, erratic behaviour and delirium. The tree grows to about one metre tall. Like the Angel's trumpets, deadly nightshades are common garden plants not native to Australia. Ingestion of a single leaf or about 20 berries can be fatal to adults, and smaller doses can cause similar harm to children.

Although it is a common garden plant in Australia, the oleander - named after its resemblance to the olive - olea - is highly toxic. People who come into contact with the plant may experience mild irritation on their skin but a greater risk is posed if any part of the plant is ingested, particularly by children, as this can be fatal. 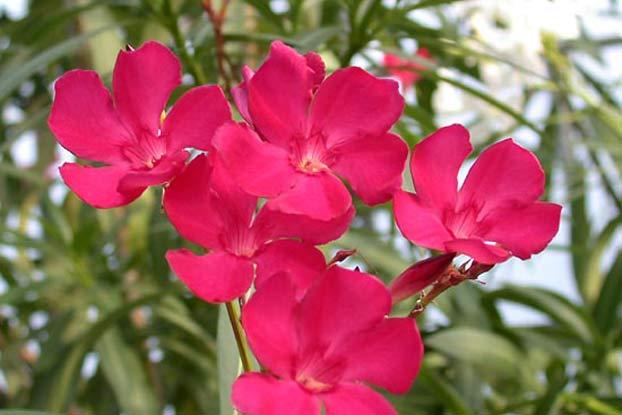 Luckily, the plant's leaves are so bitter it is unlikely a child would eat a whole one. It is still worth familiarising yourself with this plant, if you aren't already, and avoiding having them in your garden if you have small children. Burning oleander also has risks as the plant's toxicity is captured in the smoke and fumes emitted. Inhaling these fumes or cooking food on a fire of oleander plants poses many health risks.

The threat of a milky mangrove is displayed in its common name, 'blind-your-eye-mangrove'. The milky sap of this plant is highly poisonous and can cause temporary blindness if it comes into contact with a person's eyes. Other side effects can include skin irritation and blistering. 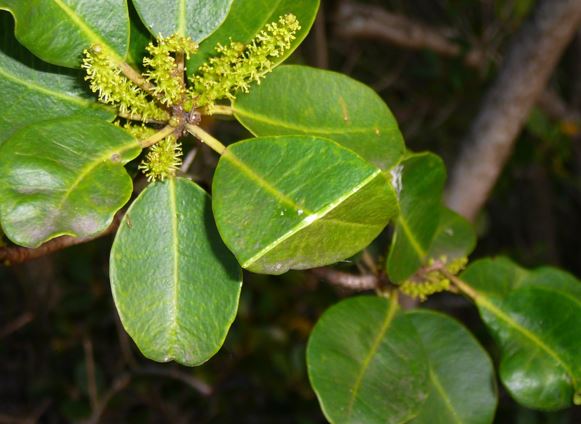 Found in Western Australia, Queensland, and New South Wales as well as Asia and some Pacific Islands, the milky mangrove grows in areas close to sea level and can survive dry open space and exposure to sea salt.

There are more than 2000 species of plants in the Euphorbia genus, that are commonly described as 'spurges'. Sap inside these plants is called 'latex' and is highly poisonous. Contact with this sap can cause serious inflammation of the eyes, nose or mouth, and even blindness. 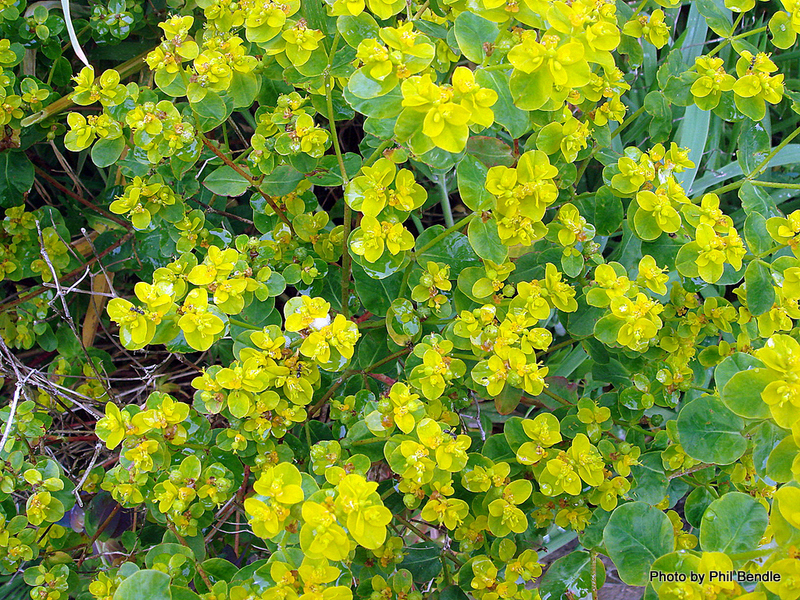 This can be avoided if the plant is handled with caution and you wash your hands thoroughly afterwards. However, the latex congeals after a few seconds in the air and is difficult to remove with water once it has hardened. In this instance, you must use soap or another such emulsifier to break it up. There are native, cultivated and weedy species of spurges and they are widespread across Australia's mainland.

The nettle family includes many species of herbs, shrubs, vines and small trees, including stinging nettles (Urtica) of which we have native species in Australia (Laportea). Many of the nettle species have stinging hairs that can cause extreme pain to people who come into contact with them. 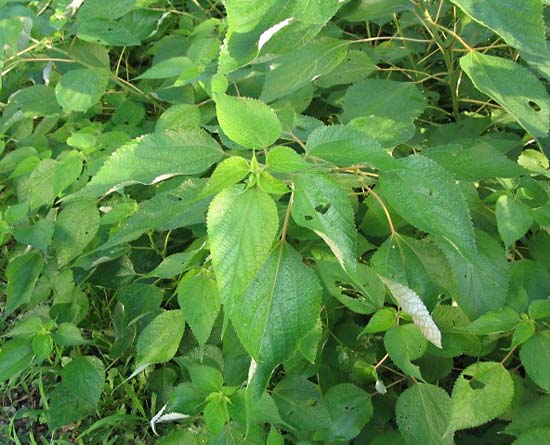 One stung and never forgotten! A member of the nettle family, the gympie gympie, or 'giant stinging tree' as it is more commonly known, can have extreme effects on people who come into contact with it. 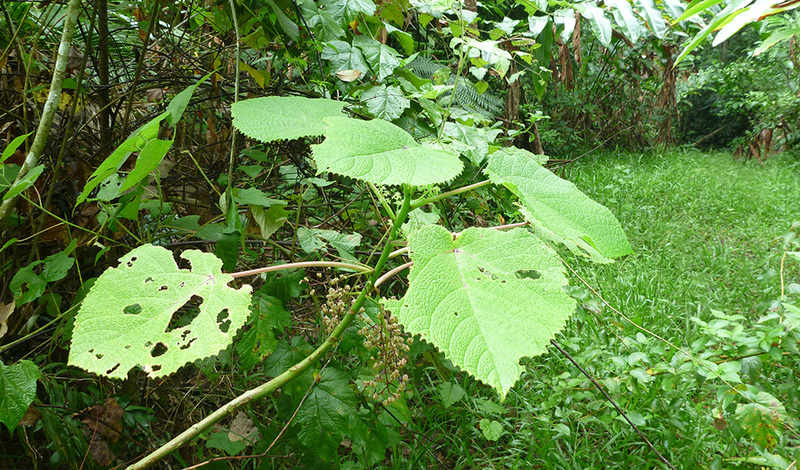 Stinging hairs on the plant's stems, leaves and fruit may cause allergic reactions, swelling and searing pain. It is recommended that people working near the plant or visiting destinations where it grows wear protective gloves and take antihistamine tablets in advance.
Castor oil plant (Ricinus communis): this is a common self-sown weed with toxic seeds, flowers, and leaves. Chewing and swallowing a few seeds can cause severe nausea, vomiting, diarrhoea and abdominal pain.

This is a common self-sown weed with toxic seeds, flowers and leaves. Chewing and swallowing a few seeds can cause severe nausea, vomiting, diarrhoea and abdominal pain. 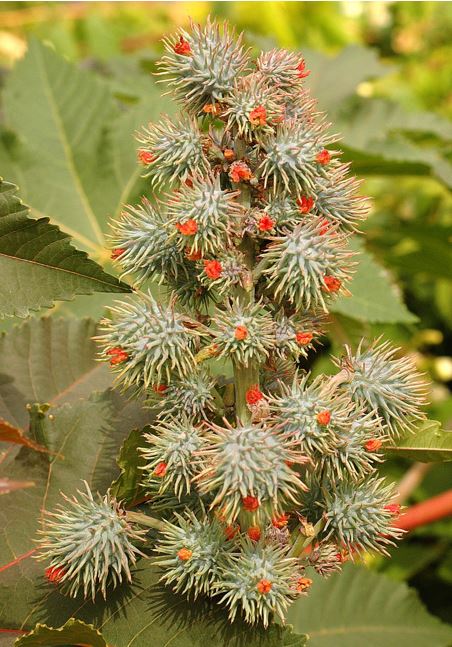 The leaves, bark, and seeds are poisonous. The seeds are particularly toxic for children and can cause shortness of breath, cyanosis (when the skin gets a blue tint because there’s not enough oxygen in the blood), weakness and light-headedness. 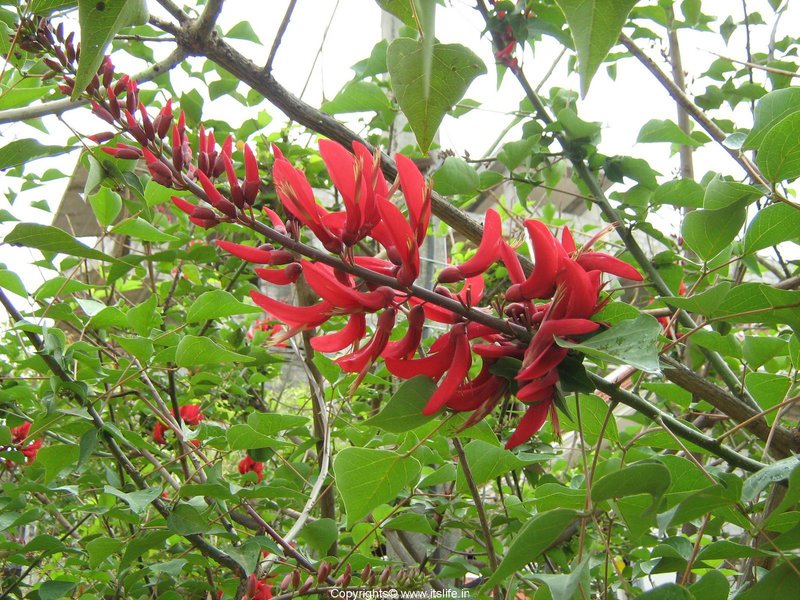 This plant can trigger strong allergic reactions in many people, causing rashes, redness, itchiness and blisters over the course of a week or longer. Avoid contact, even contact with clothing or tools, or exposure to sawdust or ash from the plant. Wear protective clothing when removing the plant. 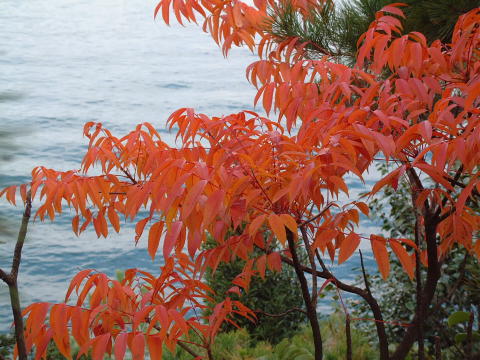 This is a native tree. Eating the fruits can cause nausea, vomiting, diarrhoea, lethargy, confusion, coma and seizures. 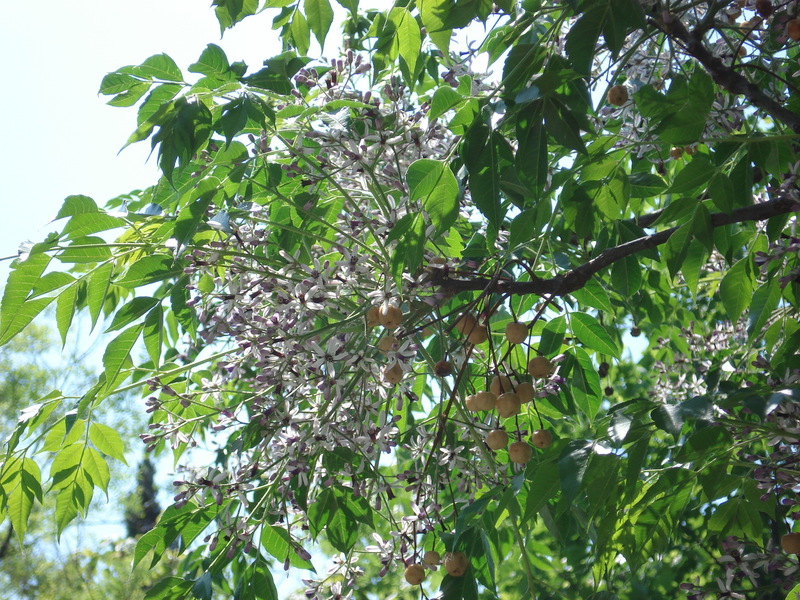 The shoots usually have a very highest concentration of poison and can be more harmful if consumed.

Toxicity usually increases with rising carbon dioxide and plants are more toxic during a drought.

About 1000 species of plants in Australia are known to be toxic to animals and humans and plenty more cause skin and eye irritation, rashes or discomfort.

About 10 percent of plants in Australia even make cyanide.

So there you have it, a guide to keep you safe from poisonous plants! I hope this blog has raised your awareness of these toxic beauties. Be sure to keep an eye out for these plants and make sure not to touch them! Eco gardener Sustainable Holly shares her top tips and expert advice on how to clone your favourite plants and grow an almost endless sup... 15 Ways to Manage Pests in the Garden Naturally