Backyards To Make Your Neighbours Green With Envy

Everybody is unique so why not show that off in your garden by creating something that's a little bit different?

We live in a nation full of cookie cutter homes in cookie cutter neighbourhoods with cookie cutter backyards. But all the people living in these homes are unique, with their own likes, dislikes, personalities and ideas. The problem is that all too often the places we call home don’t show these differences. Go to a lot of suburbs in Australia and you could be forgiven for thinking that all the people who live there are as cookie cutter as their houses.

This simply isn’t the case, but how can we show it? If you want to display to the world that you like to do things differently and want to become the talk of your neighbourhood, then take a look at these awesome ways to make your backyard stand out from the pack

Let’s start with something for the kids shall we? The backyard blackboard is an awesome idea that can provide extra hours of play for the kids for cents on the dollar. And best of all, you can make it yourself in barely an afternoon! Set up a flat piece of timber, either a slab of upcycled wood you’ve salvaged or a cheap piece of plywood, attach it to a basic frame secured in the ground and you’re already almost done.

But first the most important step, painting. That’s right, you don’t have to buy any special materials, just a can of paint and a brush. Once you’ve got these two crucial tools you can roll your blackboard onto any flat surface in a few seconds. Blackboard paint is ridiculously cheap, idiot proof to apply and works wonders.

You can install your blackboard anywhere you like. As part of the kids play equipment, next to a sandpit, up against a wall or hung on the patio. Of course, it doesn’t have to be outside, you could just as easily paint a surface and put it in a playroom or the kids bedroom, however there are a couple of reasons outside is better. For one, chalk dust isn’t a problem outside. Inside it might lead to an increase in a need for dusting and in poorly ventilated areas it could be a problem for people with asthma. Outside it has none of these issues, plus it helps to make your backyard stand out and gets kids into the outdoors. 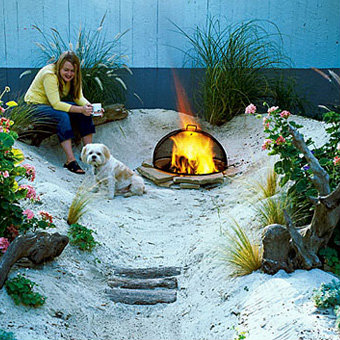 Who ever said you had to have a lawn? Why not replace it with sand instead? This might not be ideal for the entire yard, but in an isolated area it can create an awesome feature that isn’t just eye catching and a talking point, but also makes for a relaxing area to chill out in and a unique environment for some different plants to the usual garden variety.

Beach sand combined with some clever landscaping can give your backyard an entirely different feel, and will definitely make it stand out from all the others on your block. Add in a pool and you’ve suddenly got a ready made beach right outside your back door. Definitely one of the most esoteric ideas on this list, but for the right person and the right yard is could also be one of the coolest. 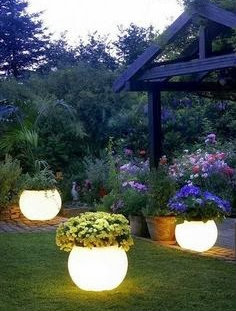 Have you ever wanted to make your outdoor area a more welcoming place at night? If so, then turning your large pot plants into glowing sources of light could be something for you to consider. You’ve probably seen this image floating around social media lately, claiming that the pots are painted with a glow in the dark spray paint. Unfortunately, this isn’t true, or if it is then the picture has been highly modified with Photoshop. Though the picture isn’t what it cracks itself up to be, there are still ways to achieve a similar effect.

Glow in the dark paint is certainly a thing, but if you buy a can expecting it to look like the picture then prepare to be sorely disappointed. We haven’t tested every brand on the market, but most will simply result in a soft glow in the evening. It won’t be enough to see by, but it should still be fine as a feature which adds a little atmosphere to your backyard. There are more expensive products on the market which can produce better results, but you still won’t be reading any books by the light.

So those Facebook pictures, are they nothing but a Photoshop job then? The program may have something to do with the almost otherworldliness of their glow, but it turns out the pots are real after all.  Rather than being painted, they actually have battery powered LED lights inside, which provide them with much more reliable glow than any paint ever could. The photo could still be photoshopped, we couldn’t say for sure, but if you’re looking for the same look then an LED pot will get you closest.

Still, don’t write off glow in the dark paint at face value. It can work quite well, infusing your garden with a faint, warm glow that will never be overbearing or annoying like true electric light can be. Whether you choose paint or LED the effect will be amazing either way, turning otherwise basic and functional pots into features that your friends will be begging to know the secret to. 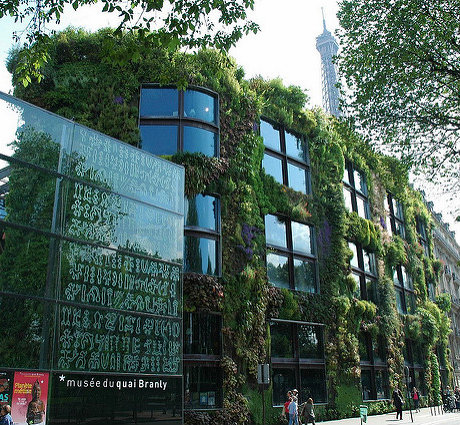 So far we’ve focused on people with nice big backyards and plenty of room to modify them to their hearts desire. But there are plenty of people out there who have no such sort of place to take advantage of, and for these people we have two words: vertical garden!

It’s hard to give much of a tutorial for a vertical garden because the design is only limited by your imagination, or at least by that of the person whose design your copying.

Vertical gardens are perfect for people who have a smaller area to play with as they take up virtually no space, can be hung against walls, fences or even indoors, are extremely compact and easy to water and can be made out of almost anything. Some of the construction items people have used for vertical gardens over the years have included old soda bottles, chests of drawers and even roof guttering.

The hanging gardens of Babylon were one of the seven wonders of the ancient world, but they’ve been lost to the mists of time. Why not rekindle the spirit of King Nebuchadnezzar and create your own hanging gardens for all the world to glory in. Or at least, that bloke in the apartment block across from you anyway. 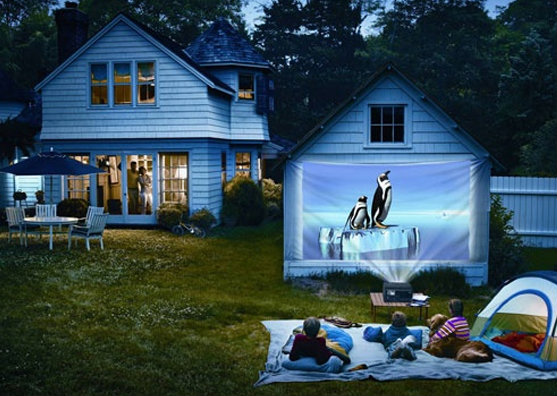 What better way to make the neighbours jealous than to have your very own outdoor home theatre system to goad them with? And what better way to restore community feeling than to invite them over for a bag of popcorn and a session or two of The Lion King or Happy Feet?

All you need is a projector, a laptop loaded with movies, a really long extension cord and a sheet and voila! Your very own movie theatre to enjoy in the great outdoors. Drag out some cushions, maybe a blanket or two, and the entire experience will be made even more comfortable.

Laptop speakers should be enough, but if you want to go with the full HiFi experience then you can drag out speakers, subwoofers and tweeters until you have theatre quality sound into the bargain.

This idea might be one of the more expensive on our list, and perhaps not the most practical, but how many of your neighbours can say that they host their very own movie nights out under the stars? Yeah, we didn’t think so. If anything is going to set you apart from the crowd then this is it.

Are you tired of fitting into the mainstream? Tired of your backyard looking like the one to your right, the one to your left, the one in front and the one behind? No more! Spruce up your garden, have more fun with it and enjoy your reputation as the having the biggest and best backyard of all.

These handy tips were brought to you by Home and Outdoor Products.